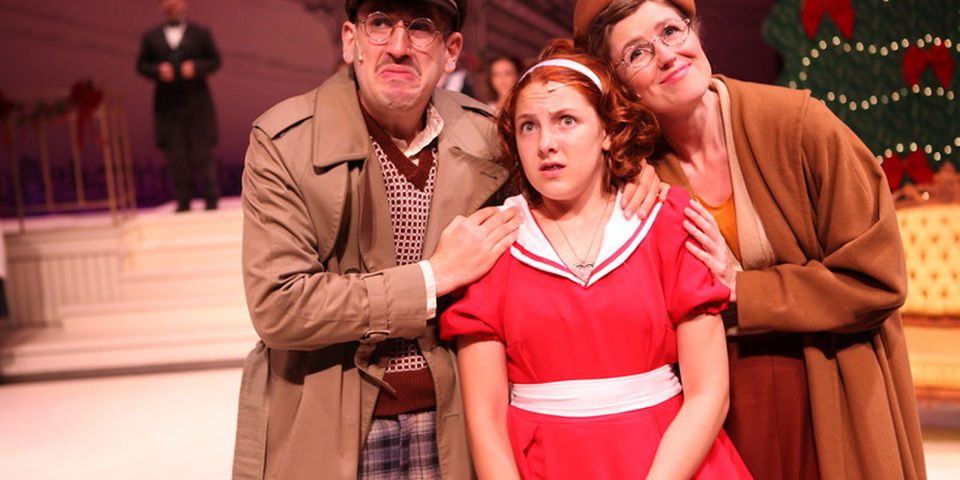 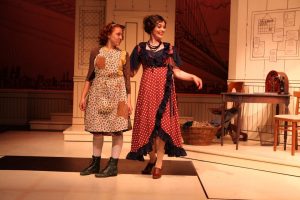 Annie is stronger than Cameron Diaz.

The horrendous 2014 big-screen re-interpretation of the Broadway musical — of which Diaz’s shrill Miss Hannigan was a monstrous lowlight — could have soured the sweet story of “Little Orphan Annie” for an entire generation.

Landing at movieplexes long after the better 1982 film adaptation, the rebooted Annie, thankfully, wasn’t seen by many kids. In fact, the box office results were something Annie’s pooch Sandy would want to bury in the Warbucks’ manicured garden.

Led by go-for-broke actresses portraying Annie, Hannigan and Annie’s homegirls, the compact and effervescent live version from Clackamas Repertory Theatre confirms that the playful play — not the movie — is the thing.

Annie is still a perfect first musical for a 10-year-old and a refreshing booster shot of optimism for grown-ups. Little girls still arrive at the theater dressed in the indomitable orphan’s red dress. Grumpy forty-somethings who’ve battled tight traffic and sweltering temperatures all day still tear up when they hear the lyric, “The sun will come out tomorrow.” 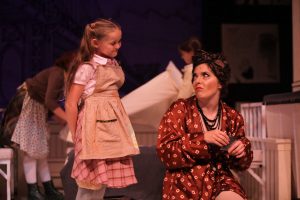 During a recent performance, Ava Marie Horton, as Annie, warmly lifted the can-do ballad to its heart-melting final “Tomorrow! Tomorrow!” as Sandy (played by stage-pup Lyndi) blissfully kept time with her tail. Someone hawking Kleenex at intermission would have made a mint.

Opening in New York in 1977 and sourced from Harold Gray’s Depression-era comic strip, Annie was the Star Wars of children’s musical theater. A score full of earworms and energized kids’ choreography turned the show into a template for what we now call family musicals – because everyone wants to see them. 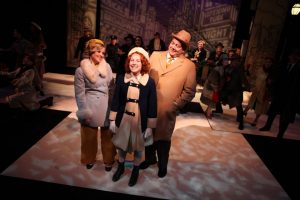 Though some of co-director Wesley Robert Hanson’s choreography appears confined in the snug Osterman Theatre at Clackamas Community College, audiences can read the actors’ expressions clearly. And, frankly, during productions of “Annie” in larger venues, the pint-sized performers can get lost in all that negative vertical space.

Double-Drammy Award-winner Cassi Kohl should score a third trophy for her hard work as Miss Hannigan. Kohl plays the orphanage headmistress like Cinderella’s wicked stepmother and stepsisters all rolled into one exhausted, lonely, selfish, hungover guardian who’s bagged a woefully under-supervised city contract. (A downside of the small venue is that Hannigan’s whistle — constantly blown to corral the girls — is very loud. You feel trapped in a gym with a maniac middle school P.E. teacher. On the other hand, you’ll never fall asleep.) 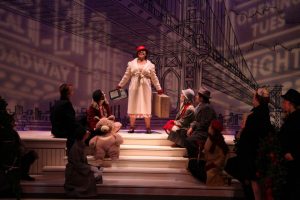 Kelsey Hoeffel plays “Star to Be” in Annie. Photo by Travis Nodurft.

Remember that. Newspapers: A source of joy.

Line of the Night: “Yesterday was plain awful, but that’s not now, that’s then,” sums up Annie and Warbucks in the finale.

Strengths: A self-starting fireplug of girl power, Annie is a terrific role model. 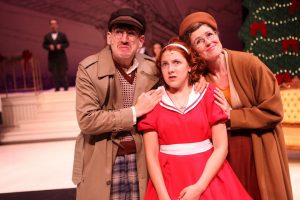 Oliver, future “Daddy,” Warbucks (Andrés Alcala) doesn’t hide his disappointment when Annie is sent to him from the orphanage instead of a boy. Nevertheless, Annie persists to win him over. She is respectful, loyal, clever and undeterred. In pushing Warbucks past his noblesse oblige duties, Annie’s also a perky reminder to dig out and dust off our own moral compasses.

Take-away: Every seat seems like front row in this Annie bursting at the seams with pluck and positivity.