Women of a “Certain Age” Take Center Stage in Ripcord, a Comedy About Learning to Get Along 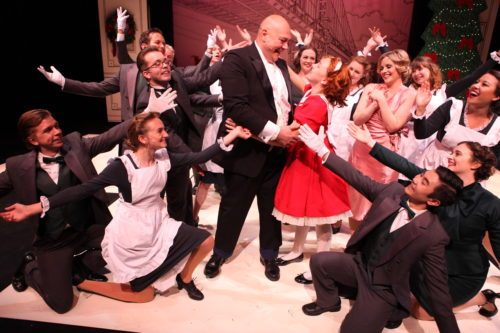 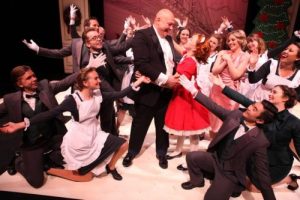 Andrés Alcalá is the center of attraction as Daddy Warbucks. Photo by Travis Nodurft.

Clackamas Rep’s “Annie” brings the orphans in from the cold and heats things up for the audience.

“Never work with animals or children” was the sage actorly advice from legendary actor and comedian W.C. Fields. Luckily for us, Clackamas Repertory Theatre steered far from this piece of advice with its production of Annie at Clackamas Community College’s Osterman Theatre in Oregon City.

This production’s title character is a child actor, eighth-grader Ava Marie Horton, who is a true delight as Annie. She is joined in the cast by the children who play the rest of the orphan girls under the charge of Miss Hannigan (Cassi Kohl). Each one of the child actors is a delight, but together — when singing “It’s a Hard Knock Life,” for example — they really shine. The choreography and musicality of that song helps, as the girls use buckets and brushes to make music while cleaning the floor and are in lock-step with their dancing — one even swings from the lights! It is perfectly choreographed orphanage chaos that will have audiences singing along.

But Clackamas Rep didn’t stop at the children. The golden dog playing Annie’s orphaned dog Sandy — who is not credited in the program, so I can’t give him or her proper name recognition — wasn’t in many scenes but stole the show each time (he or she) appeared onstage.

The children and animals aren’t the only show-stoppers here. Kohl is deliciously over-the-top perfect as the wretched Miss Hannigan. Andrés Alcalá seems born to play Daddy Warbucks. Jon Quesenberry (who is also the vocal director in this astounding musical) is equal parts sleazy and hilarious as Miss Hannigan’s shady brother, Rooster. And Deborah Mae Hill, who portrays Warbucks’ assistant Grace, dances and sings like she was dropped into 2018 Oregon City from the 1930s.

The whole multitalented ensemble show their chops — one especially memorable scene features a handful of the cast as President Franklin Roosevelt’s Cabinet plus David Mitchum Brown as FDR himself. Annie convinces the president to make his Cabinet sing, despite their reservations. Michael McGee is wonderful, going from resistant to gleeful over the course of the song. It’s a moment that will make you yearn for a less divided America.

There must have been challenges in casting animals and children; in telling this somewhat dated story in 2018; in a small company like Clackamas Rep mounting such a large-scale musical production, but you’d never know it in this enjoyable tale of the good guys finishing first and the bad ones getting their just deserts.

The scenic design (by Christopher D. Whitten, who doubled as lighting designer) is marvelous. When you arrive, the space is filled with large black-and-white strips from the original “Annie” comic, with a full-color of Annie and Sandy front and center. But the real magic happens after that, as furniture, walls, and entire rooms come and go from the stage before our eyes, transporting the audience in a moment.

The live orchestra led by conductor Lars Campbell is phenomenal, getting the whole thing started and closing down the house after the show — and rarely getting a break. After all, this show runs just over two hours with sixteen musical numbers.

If you have children, they are going to love being introduced to classic songs most of us feel like we’ve known our whole lives — the aforementioned “It’s a Hard Knock Life,” of course, plus “Tomorrow,” and “I Think I’m Gonna Like It Here.” But, even if you don’t have children, this is a musical production worth seeing.