Rehearsals in Motion for Baskerville 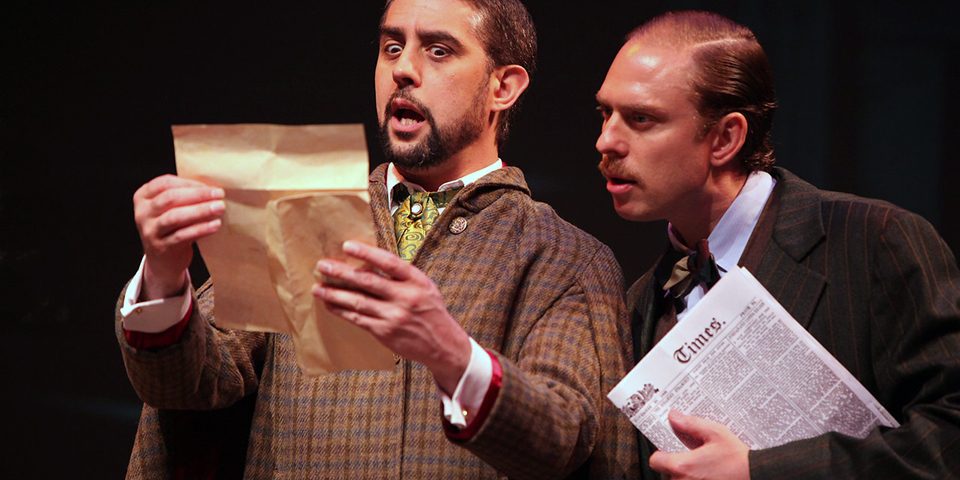 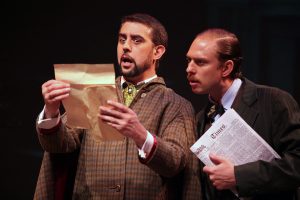 Clackamas Rep romps through Ken Ludwig’s spoof of the Sherlock Homes mystery “Hound of the Baskervilles.”

The man in the deerstalker hat and his biographer sidekick Dr. Watson live for the thrill of the hunt in Ken Ludwig’s screwball spoof of the most popular of Sherlock Holmes’ tales, Baskerville: A Sherlock Holmes Mystery.

The whodunit of this play, which has just opened at Clackamas Repertory Theatre, is less about the butler, the shady neighbor or estranged relative, but rather the grist that lies in which of the five actors is playing which of the 40 or so characters at any particular time. The cast, directed by David Smith-English, ebbs and flows on and off stage in a contradance with lightning-quick changes into detailed costumes. If it wasn’t for the ease and energetic joy the cast carries as the pace increases over the performance, you might almost think you were at a hockey match, where players often lose a few pounds in sweat per game. The puck doesn’t stop there, as the audience lapses into a meta meta suspension of disbelief and the real laughs kick in. By the end of the play the timing is rapid-fire and off-the-hinges absurd. In one of the final moments two people play three characters locked in an embrace, trading off hats and lines like they live in a 4D funny mirror.

This Sherlock Holmes (John San Nicolas) does not wear the long drawn face of a nicotine addict who also likes tight fluffy lines of cocaine to fuel his broad assumptions from few details. Ludwig’s Sherlock is a stable middle-class armchair-professor hired gun who probably in a few decades of literature will inspire a James Bond-type genius, but with the contrast of being unavailably sexy. Dr. Watson (Dennis Kelly) is the detective chasing skirts. Watson, as narrator and chronicler to his trusty flatmate, is also in hot pursuit of female affection and Holmes’s approval at every turn and twist of the plot. His high-cheekbone smile of satisfaction looks to be the result of years of good marks at boarding school.

The 19th century sensibility of Conan Doyle’s writing style and humor runs throughout the play. Holmes’s arrogance, inflexible etiquette, and Bohemian qualities birth snarky asides, such as his response in one of the first scenes: “Call off your spaniel who is clawing at my door with the zeal of a Christian!” Or the Texan (Mark Schwahn) who describes the setting of the moor: “Talk about gloomy. Reminds me of my mama’s funeral without the liquor.”

The script is a close adaptation of The Hound of Baskervilles, and its the stage directions make it madcap funny. This is not an evening of blue or black comedy that folds your abdomen into streaks of pain and your face into uncontrollable tears. Baskerville is a good wholesome merry-go-round escape. Ludwig’s lines poke fun at the Holmesian genre: “Holy cow, it’s like I walked into a dime store novel.”

Jayne Stevens is the one woman of the show. While Watson should be the focus of the play as narrator and the character with the most time in the spotlight, Stevens’ outnumbered performances to her male counterparts (Kelly, San Nicolas, Schwahn, Alex Fox) is nevertheless the polestar of Clackamas Rep’s production. For a few moments she’s a kind of ditsy petty aristocrat magpie falling into whomever’s arms; next she’s a sturdy and graceless Cockney delivery boy; then a stick-in-the mud Swedish maid buried in a thick pea soup fog of an accent; and all of a sudden a kind but caterwauling Scottish nurse.

There’s never been a time when dear readers or playgoers doubted a Holmes mystery not be solved. We’re all confident that the glowing beast of the English swamp will have a perfectly reasonable explanation. The trail the Baker Street private eyes leads them from the well-padded chairs of a cramped but comfortable Victorian parlor to the sleek refined desk of an international hotel to the all-about-business office of a typist for hire. In the background of Clackamas Rep’s set is a large projection screen moving like a zoetrope that flashes on locations, nods to the aesthetics of the age, and gives props to the frenetic tempo.

There’s a giddiness to the cast as the actors pull off the gags and play kooky characters. You can feel how much fun they’re having with the show. By the end, you’ll feel it, too.