“Music Man”: Strike Up the Band 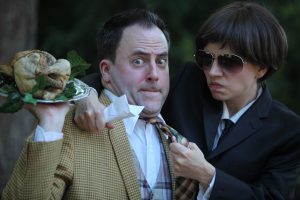 If you’ve a hankering for some old-style broad comedy, Clackamas Repertory Theatre’s current production of Richard Bean’s “One Man, Two Guvnors” might be just the thing.

A 2011 London National Theatre triumph and highly acclaimed success when it arrived on Broadway the next year, Bean’s play is loosely based on Carlo Goldoni’s 18th-century style commedia dell’arte classic, “The Servant of two Masters.” Bean sets his action in 1963 Brighton, England, and skillfully blends in British Music Hall humor to add to the jollity.

Most important to the success of this National Theatre hit was the brilliant work of James Corden, who played Francis, the zany servant around whom the action revolves. Corden received the 2012 Tony for Best Actor in a Play for his efforts in this role and has since moved on to American television hosting CBS’s “The Late Late Show with James Corden.” He’s quickly becoming an American comedy star.

There’s certainly a risk in taking on a play that is so closely associated with a particular performer, but Clackamas Rep’s company, led by Jayson Shanafelt in the lead role, easily passes the laugh test. The shenanigans in which Shanafelt’s Francis indulges while simultaneously trying to please two different masters are hysterical. Not only must Francis keep his two masters ignorant of each other, but as it turns out the oblivious Francis is unaware that one of his masters is really a mistress assuming her dead twin brother’s identity. And then of course things are further complicated by the fact that these two “masters” are actually lovers separated by unfortunate circumstances, and on top of that …, well, suffice to say, the plot’s convolutions don’t end there. Throw in songs and music by The Skiffle Band as well as by cast members and the occasional moments when audience members are recruited into the play, and you have an evening full of fun.

Most significant performance: Not surprisingly the nod here goes to Shanafelt. Certainly some of his comic bits are reminiscent of Corden’s performance, but Shanafelt’s Francis is distinctly his own. A leaner Francis than that of Corden, Shanafelt’s comic servant may lack the humorously chubby vulnerability of his predecessor, but there’s a likeable ironic edge to his interpretation even as he masterfully conveys Francis’ bewildered perplexity at all the twists and turns that beset his ill-conceived plots and ploys. Shanafelt demonstrates a finely tuned sense of comic timing throughout and a delightfully charming quick-wittedness in his improvised bantering with the audience.

Most memorable moments: Having initially enlisted himself in the service of two masters, Shanafelt’s Francis has a moment of self-doubt. His inner dialogue turns into a hilarious slapping, punching and wrestling match with himself. The broad humor here sets the tone for the whole evening.

Other strong performances: The company as a whole offers Shanafelt solid support with a range of cartoonishly wacky characterizations including: Jayne Stevens playing Francis’ love interest, the amusing all-too-“bouncy” Dolly; the diminutive Annie Rimmer as Rachel, who uses a humorous lower-jaw-leading, tough guy demeanor to portray one guvnor, her dead twin brother Roscoe; Alex Fox as the other guvnor, the ever-so droll overly self-possessed Stanley; Travis Nodurft as the bumbling old servant Alfie.

Low point: The Skiffle Band is great, but even though band members occasionally attempt to speak with English accents, with their Western bow ties and a country/western sensibility, they don’t fit the play’s early ’60s British motif and, in fact, seem to work against it. Still, there’s no loss of merriment.

Take-away:  Director David Smith-English’s well-paced production of this wonderfully wild comedy will give audiences who have not had the opportunity to see the National Theatre production on stage or on video a chance to share in the laughter.