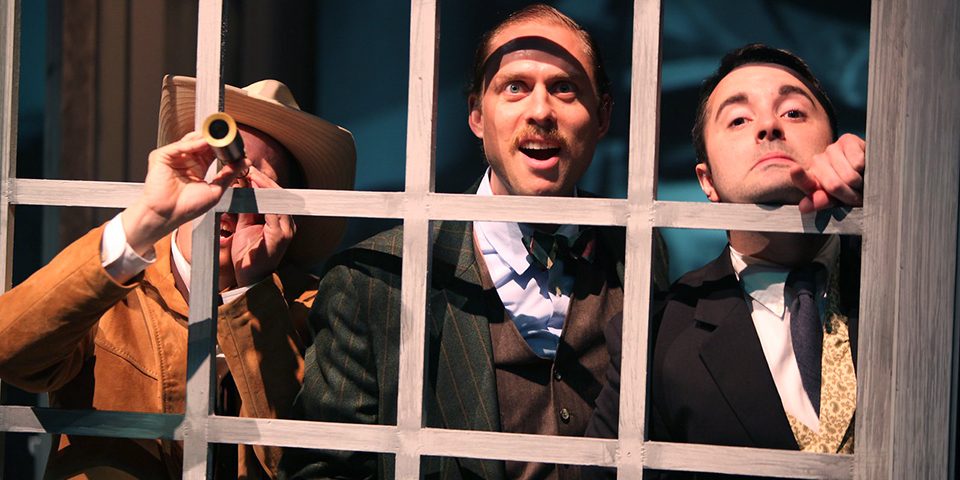 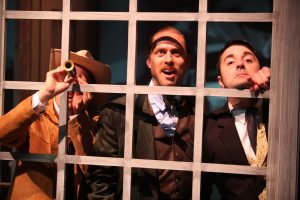 Although I’ve always thought of the summer as a down time for live theatre in metropolitan Portland, there really is a lot going on. One special summer treat is the Clackamas Repertory Theatre, which produces three summer shows yearly.

The play is a mischievous comedy-thriller and a spoof on the Victorian Sherlock Holmes mystery, The Hound of the Baskervilles by Sir Arthur Conan Doyle. It features John San Nicolas as Holmes and Dennis Kelly as Doctor Watson. Alex Fox, Mark Schwahn, and Jayne Stevens complete the cast, and each appear in up to 20 different roles. As the only female member of the cast, Stevens seemed particularly busy, playing everything from the nosy Mrs. Hudson to the bosom-heaving Beryl, with her over-the-top German accent. Costume changes came quick and quicker as the three actors scurried to fulfill their roles. All was accomplished seemingly without a hitch.

The entire goings on, as Holmes commented in the play, lent “a feverish quality to this particular tale that intrigues me.” Also of note were some curious offstage noises that had the audience in stitches, plus a red-eyed, slavering hound!

This fast-paced farce is suitable for all ages. Those attending the nights of July 7, 14, and 21, are invited to enjoy post-production, interactive talk-back sessions with cast and crew.

Founded in 2004, Clackamas Repertory Theatre is a professional theatre company offering high-quality, financially accessible productions for the people of Clackamas County and beyond. Though it receives only in-kind support from the college, it helps prepare current and former CCC students for careers in theatre, and offers Clackamas County youth the opportunity to experience theatre first-hand through summer internships and classes at the college.

Director David Smith-English was for 17 years Director of CCC’s Theatre Department. The play runs through July 23.