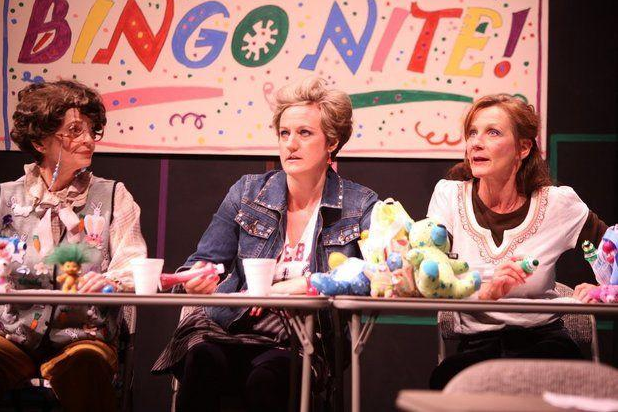 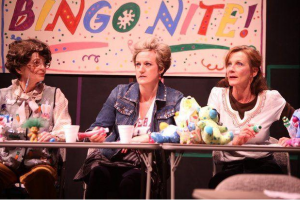 In “Good People” by David Lindsay-Abaire (“Fuddy Meers,” “Rabbit Hole”) currently at Clackamas Repertory Theatre, a few burning questions thread through this absorbing comedy-drama: Are we responsible for our own poverty and victimhood? Do we just need to work harder? Or does upbringing, class and good luck make a difference in how we turn out?

The setting here is Southie, a poor neighborhood of South Boston where Abaire grew up. It’s an Irish Catholic enclave, blue collar, scruffy, insular and independent, where bingo is the game of choice, and street fights come with the territory.

As the lights go up on this compelling production, the music of Bruce Springsteen, the working class poet, fills the stage, with its impressionistic outline of a cityscape designed by Chris Whitten: Downstage we see a dumpster behind the Dollar Store.

Margie (Lorraine Bahr) has just lost her job because she’s always late, taking care of her disabled adult daughter, Joyce, when the babysitter doesn’t come. It’s a long litany of excuses but as we listen to them, we realize how completely real they must be. She has known her boss Stevie (Sam Levi) since he was a baby in this tight community, but he’s under pressure to fire her.

When she meets up with Mikey, an old boyfriend (Doren Elias, looking 20 years younger from his other roles at CRT), she learns he’s a successful doctor, even though they grew up together in Southie. He got out. She didn’t. What happened here?

The second act takes us to his posh house in Chestnut Hill, an about-face from the shabby digs that Margie has. It’s gleaming, smartly decorated, immaculate and insular in its own way. Mikey’s lovely African-American wife, Kate (the incredible Damaris Webb), opens the door to Margie, and from here the story flames into action as the truth stands out from false legends.

Highlights: You might say the whole second act is a highlight, as Mikey, Kate and Margie unravel what is real and what is not. Also, Abaire ends the play with a symmetrical quality that evolves quite naturally when Margie finds good fortune in a least-expected place.

Low notes: The first act uses a bit too much exposition, and although it’s fun to hear Margie’s bingo pals laugh, argue and reminisce about some pretty dreadful Southie memories, it goes on too long. Director David Smith-English is not at fault, nor are Bahr and the actors Cyndy Smith-English as Dotty, Margie’s smart-alec landlady and Amanda Valley as crusty Jean with her outdated beehive hairdo. We realize these folks aren’t just providing comic relief; they’re in the Southie black hole too. They laugh to survive.

Most valuable performer: Tomboyish yet waiflike, her vowels flattening into a nasal whine, Bahr makes Margie (pronounced with a hard “g”) vulnerable yet oddly strong. It’s an achingly authentic high-energy performance. Bahr uses her body to communicate her feelings, slumping ragdoll style when discouraged, sitting up like an affable alert mongrel when hope surfaces. The actor’s Boston accent becomes integral to her character, who is a kind person beyond the tough-talking Southie veneer.

Line of the night: “Every year they give these kids medals for not killing each other.”

Best moment: There are many good ones.

Biggest surprise: There are two plot points that are surprising, and we don’t want to give them away.

This is a smart, well-crafted production, in the end, thought-provoking, sad, funny, insightful. It’s Abaire’s valentine to Southie, yet he’s not sentimental in his writing. The people in this play are neither bad nor good, they’re all getting by as best they can, but it’s harder for some than others.

By Holly Johnson, September 20, 2014, for the Oregonian/OregonLive