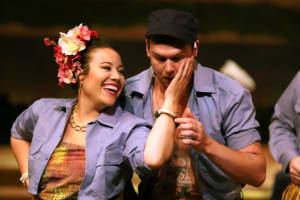 The ideal summer-musical matchup might’ve been Footloose and Fancy Free, the great Leonard Bernstein/Jerome Robbins dance sequence that was quickly expanded into the 1940s Broadway hit “On the Town.” But when it comes to immersing yourself in the pleasures of old Broadway musicals, “Footloose” and “South Pacific” work nicely, too. American period pieces from very different periods, these two evergreens offer 21st century audiences a tasty bit of nostalgia and an uneasily lurking reminder that, culturally, there’s not much new under the sun.

“South Pacific,” which is getting a solid revival through Aug. 25 at Clackamas Repertory Theatre, is a curious blend of old-fashioned Broadway razzmatazz and earnest postwar proselytizing that not so long ago seemed dated yet now, with the American and global resurgence of cynical race-baiting for political gain, seems to have found its time again. “Footloose,” which is getting a knockout (and sold out) revival through Sept. 1 at Broadway Rose, combines good old-fashioned teen rebellion and a catchy ’80s backbeat with the vision of a closed-in theocratic society a bit like Margaret Atwood’s Gilead in “The Handmaid’s Tale,” and … oops: Here it comes again.

Whenever we watch or read anything we call a “classic” we view it through at least two sets of eyes: the prism of its own times, and the inevitable immersion in ours. Especially if we’re clinging to a belief in slow but steady social progress, it can be humbling to realize that often the distance between the two isn’t so very far at all.

What: that old thing again? Absolutely – you can’t keep a good show, or a superb set of songs, down. First and foremost “that old thing” has those seductive Rodgers & Hammerstein songs, still-hummable hits seven decades later: “Some Enchanted Evening,” “There Is Nothin’ Like a Dame,” “Bali Ha’i,” “I’m Gonna Wash That Man Right Outa My Hair,” “Younger than Springtime,” “Honey Bun,” “This Nearly Was Mine.” The show’s brash, comic, yearning, sentimental score is a cavalcade of musical Americana, the heart and soul of any “South Pacific,” and still reason enough, after all these years, for any revival.

Yet “South Pacific,” which debuted on Broadway in 1949 and is based loosely on James Michener’s post-war book of stories “Tales from the South Pacific,” is more than a score. It’s a snapshot of the American mind at a particular time, just after World War II and on the cusp of the Civil Rights Movement, whose emerging ideas, some of them shaken loose by an insular nation’s growing awareness during the war years of the perils and possibilities of the world at large, were in the air.

Clackamas Rep’s handsome new production, co-directed by Jayne Stevens and Wesley Robert Hanson, is a bit uneven vocally but does decently and sometimes much better than that by the songs, with especially good work in its chorus scenes, when the whole cast breaks out into vivid and exuberant song and dance (Stephanie Lynne Smith is vocal director). The leading actors, sparked by Michael Sharon’s brooding and propulsive performance as the French expat planter Emile de Becque, dig into the heart and soul of the story: Kelly Sina as the brash and eager young American Ensign Nellie Forbush, the object of Emile’s affections; Josh Johnson as the I-can-get-it-for-you-wholesale sailor Luther Billis; Kelsey Hoeffel as the island wheeler-dealer Bloody Mary; Adam Elliott Davis as the daring and doomed Marine Lt. Joseph Cable.

“South Pacific” is a lot of musical to stuff onto Clackamas Rep’s intimate stage in the Osterman Theatre at Clackamas Community College, but the deft scenic and lighting director Christopher D. Whitten knows every nook and cranny of the space and how to make it play bigger than it is, from beachside bazaar to plantation dining hall. Lars Campbell’s scaled-down, 10-piece orchestra fills the hall nicely, and directors Stevens and Hanson keep the action sharp and busy without feeling jumbled or cramped.

Rodgers and Hammerstein were classic American progressive liberals of their day, and “South Pacific” carries an earnest air of betterment: We must overcome our impulse to racial resentment and inequality; we must learn to love. Yet the story also carries more than a whiff of colonialism (although not to the extent of R&H’s “The King and I”) – its hero, de Becque, is an exiled Frenchman who runs a plantation worked by Southeast Asians; he had taken a Southeast Asian wife, who bore him two children before she died, children whose existence he conveniently neglects to mention to Nellie when he’s courting her. Nellie, who comes from the white-supremacist bastion of Little Rock, is repelled by the idea of mixed-race children, a prejudice she must overcome. Exoticism also rules the day: Neither Nellie nor Joe Cable, who is besotted by the young native woman Liat (Briana Kuni), wants to go back to the troubling complexities of the United States: They consider this a paradise, and want to stay. Indeed, Joe seems in love not so much with Liat as with the idea of Liat, a fantasy Liat, pure and innocent and simple, from a pure and innocent and simple place. Bloody Mary is in one sense a comic-foil caricature of a “native” character, a crafty, quick-talking con artist who speaks broken, slangy English and is eager to pimp out her daughter, and that’s the way she’s often played. Yet in another, more complex sense – one that Hoeffel draws out beautifully in her performance – she’s a strong and brave person playing the limited and unfair hand that’s been dealt her, and determined above all to secure a better life for her daughter than the one she herself has been forced to live. Anyone interested in writing a new play exploring the world of South Pacific from Bloody Mary’s point of view, please have at it.

If “South Pacific” seems today sometimes a little quaint, a little innocent, a little cloistered, a little only just awakened to the world as it’s become, it nevertheless rings strong and true: As Lt. Cable bitterly sings about the hatreds and prejudices infesting the world, we’ve got to be carefully taught. The teaching all around us grows louder and more insistent, careful and reckless, a daily inundation of belligerence and violence. It isn’t new. It’s been here for a long, long time, sometimes slumbering, sometimes, as today, roaringly awake. “South Pacific” is back to remind us, and to wrap us in a balm of grand American song. 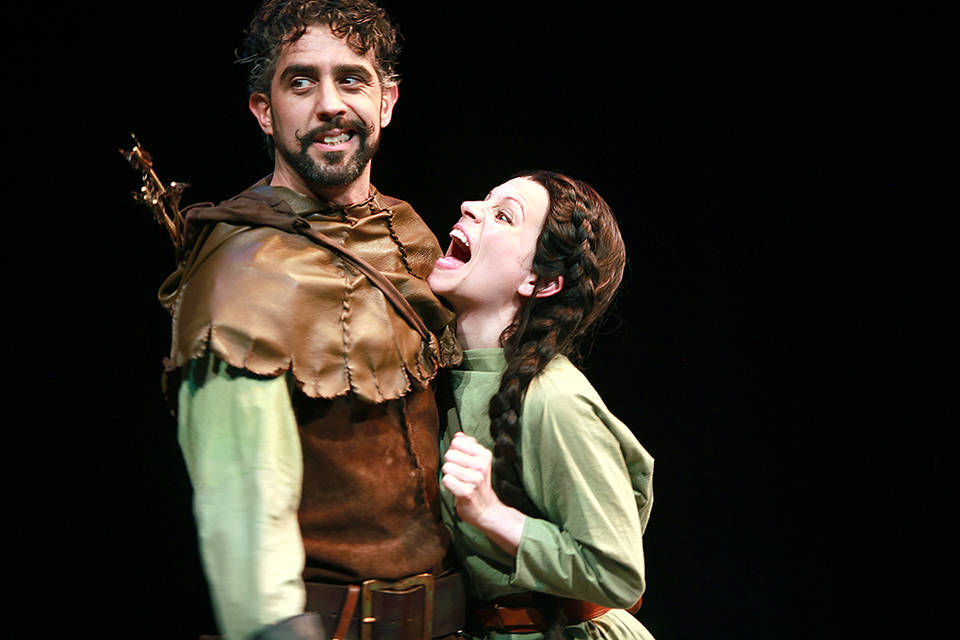