“The Philadelphia Story” a Class Act 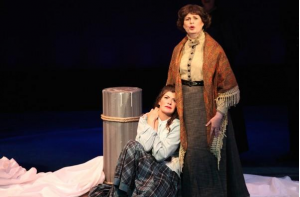 Carousel, currently in fine form at Clackamas Repertory Theater, has a lot in common with Thornton Wilder‘s 1938 play Our Town. The Rodgers and Hammerstein classic premiered in 1945, just two years after Oklahoma! dazzled Broadway, shares with Wilder’s work a dark quality, the setting of a small New England town in the late 19th or early 20th century. They both also feature main characters who die, return to earth, invisible, to learn lessons and understand love. Both plays resonate with a sense American history, although it’s never articulated, but Carousel is special because it was one of the first musicals to use song and dance to help tell the story. The darkness of the plot, its social-realism themes of poverty and struggle, are played against some of the richest, loveliest music theater music from that era.

The production at CRT, directed by David Smith-English, is sweet and solid, filled to the brim with strong group numbers and fine chorus work throughout. When in the opening scene the women who work in the cotton mill mime their weaving, then move into a dance, for quite a few minutes not a line is spoken, yet they’ve created sense of time and place. The same goes for Jenika Flynn’s fine dance solo in the final act as the 15-year-old Laurie, daughter of Billy Bigelow (played by Michael Mitchell), who later dances with a male ensemble. It moves the story along nonverbally, much helped by picturesque choreography from Wesley “Angel” Hanson.

Mitchell’s Bigelow is not big and handsome, as the character is sometime portrayed (with a nod to Hollywood). But casting against type broadens Bigelow, and gives him depth too. The actor is sweet-faced, shortish and stocky, and he builds Billy’s edgy quality, his working-class toughness, his inability to be tender, into his performance. He’s Everyman, in a sense, feisty and flirty and full of fight. So when he learns about love in the second act, it’s all the more potent.

Dru Rutledge’s Julie Jordan is perfect, innocent and lovely. Her voice is marvelous, particularly when singing with Carrie, her best friend and confidante. Costumer Alva Bradford does a great job fitting everyone into period clothes, and Rutledge’s long plaid pleated skirt adds to the feeling of time and place. I kept thinking of paintings by Winslow Homer of women dancing by the sea, as the female leads and chorus members swirled about.

Other strong voices and fine characterizations come from the marvelous tenor Jonathan Quesenberry as Mr.Snow, a young man who has ambitions to get rich, and Cassi Kohl as Carrie Pipperage, his vivacious fiancee. It’s a treat to see Quesenberry on stage, as he’s usually serving behind the scenes as composer, musician or musical director. Kohl combines energy and warmth as she shapes Carrie into one of the strongest figures in the show.

Strong, too, are three secondary actors; Doren Elias as Jigger, the creepy bad guy in the story (compare him to Judd Fry in Oklahoma), who creates a perfect case for sexual harrassment; Bryna Montgomery as Nettie Fowler, who is a mother figure to Julie, and the marvelous Tobias Andersen–sternly avuncular, slightly droll and definitely in charge– is perfect in the cameo role of the Starkeeper, a prominent figure in the New England afterlife that Billy visits.

Chris Whitten‘s set makes you gasp in admiration when the lights go on in an arc above the stage, and the outline of a carousel twinkles with sparkling lights as well. The whole effect is dreamy. His stage lighting, including a backdrop that changes color, and the creation of a moody, dappled stage floor, works beautifully. And in the last act, a big swatch of white fabric, original the sail of a ship, works nicely as the terrain of heaven.