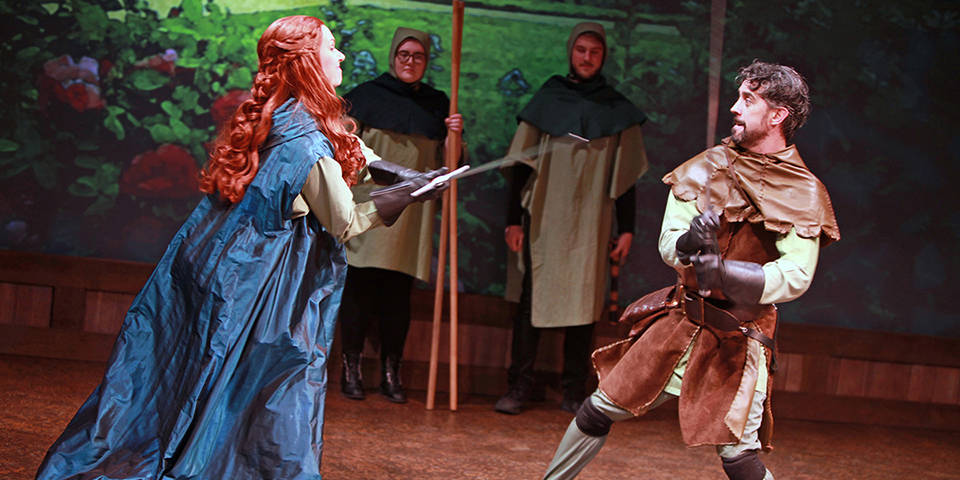 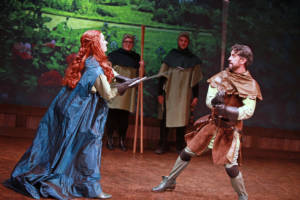 When it comes to Robin Hoods, we’ve had everything from swashbuckling (Errol Flynn) to serious (Kevin Costner) to silly (Carey Elwes). Ken Ludwig’s version, Sherwood: The Adventures of Robin Hood, currently running at Clackamas Repertory Theatre, combines all of them, with heavy emphasis on the silly. It’s a fun, family-friendly way to spend a summer evening.

The story is the one you know and love, mostly — while King Richard is away fighting in the Crusades, Prince John and his henchmen, including the Sheriff of Nottingham and Sir Guy of Gisbourne, levy hefty taxes on the poor to stuff their own pockets. To fight this injustice, Robin of Loxley forms a band of Merry Men who live in Sherwood Forest and spend their days relieving the rich of their riches, which they give back to the poor. This version focuses on Sir Guy, who’s supposed to capture Robin Hood, but is foiled at every turn.

The play is campy. Eight actors play 38 characters, and Ludwig’s script is loaded with slapstick and Monty Python-style humor. Director David Smith-English has turned the camp dial up several notches, ensuring that no possible joke or moment of physical comedy is neglected. Projection/sound designers Annie Rimmer-Weeks (who’s also in the show) and Orie Weeks III elevate this effort with fantastic digital projections that facilitate the journey between the myriad settings — forest, river, castle, archery tournament, etc. There’s also plenty of swordplay that earns the show swashbuckling status. In general, Sherwood speeds along quite enjoyably (the only exception being two long and unnecessary dance numbers, which could easily be cut).

The whole cast contributes valiantly to the over-the-topness. Robin (John San Nicolas) is a bit of a rascal, at least in the beginning — he doesn’t set out to be a hero so much as fall backward into the role. His transformation into vigilante seems less a philosophical decision than just something fun to do. Maid Marian is awesome. Played by Portland newcomer Amber Bogdewiecz, she’s no damsel in distress, but rather fierce, clever, and the best archer in the land. And Sir Guy, played perfectly slimily by Tom Walton, is the ideal villain to hiss at (which the opening night audience did with gusto). The whole affair is narrated by Todd Van Voris, who plays Friar Tuck and has, unequivocally, world’s best voice.

And yet, even the commitment to extreme comedic distraction couldn’t mask the moral lesson. Robin Hood has long been controversial (in the 1950s, there was a movement to ban it because it was accused of being communist), and the story is highly relevant today with its idea of economic justice. I found it impossible to watch without thinking about growing income inequality and what a modern Robin Hood might look like.

Overall, Sherwood is 90% silly, 10% thoughtful, and absolutely worth seeing. Sherwood runs through July 21.