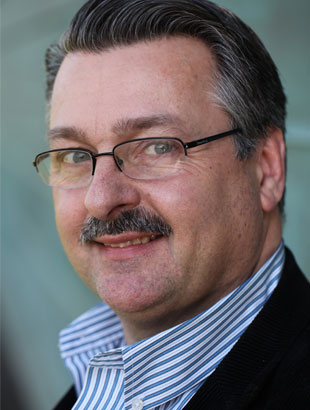 It was actually Chris’s mother who introduced him to theatre, which she called“Dramatics.” Her primary motivation for this was an attempt to channel the boundless energy that he used to create everything from monster characters (The Wolfman was his personal favorite) to props and scenery in their backyard. His parents often called him “motor mouth,” and if you ask Chris a question that requires a thousand word answer, he will most likely reward you with 1,001.

Throughout high school, Chris proudly wore the custom “Drama Jock” t-shirt his parents had printed for him. He repeatedly discovered that this was interpreted by football players as “shove me into a locker.” He was only a sophomore when he was cast as Tony Kirby in “You Can’t Take it With You,” and discovered during the rehearsals for the kissing scene that the senior who played Alice was a method actress. By his junior year, the director had noticed that Chris had an ability to paint that exceeded the abilities of the technical theater instructor. For the remainder of his high school career, Chris found himself backstage, a position that involved much less kissing.

During his time at Western Oregon University, while pursuing a degree in fine arts, Chris also studied technical and performance theatre. He was the first ever student in the department to design both the sets and lights for a main stage production. The play was “Hamlet,” and his design work resulted in being honored with the American College Theatre Festival Region Nine Scenic Design award. He was later asked to present the scenic design at The Kennedy Center in Washington D.C. The play itself was not invited, which was a difficult moment for most of the cast.

After graduation, and like many aspiring actors, Chris found his performance training to be barely useful in earning a living. Chris spent enough weekends at the Portland Saturday Market performing mime routines for shoppers to know that homelessness was only six steps closer to the underside of the Burnside Bridge. Following the Great Mime Strike of ’84, Chris broke his vow of silence, removed the white gloves, and recycled his invisible boxes. He refocused his energy on substitute teaching and stand-up comedy, or stand-up comedy as substitute teaching.

While standing in for a junior high school typing teacher on a rainy Tuesday in April, Chris realized that this was not what he was meant to do. He took his theatrical design portfolio to the staff of the Portland Civic Theatre and was added to the design and production team. Chris spent six seasons gaining invaluable industry experience and knowledge. He moved quickly up the company ladder, and by his third full season he had earned the title of Technical Director. Chris later opened his own design studio and built his small company up to sustain the design needs of several prominent theaters in the area. This experience included spending over a decade as Resident Scenic Designer for the Lakewood Theatre Company and Broadway Rose.

It was during the Lakewood Theatre Company’s production of “Baby,” that he met one of the actresses in the cast that would profoundly alter his future: Cyndy Smith-English. Cyndy’s husband David had recently taken a position at Clackamas Community College, and was aware of Chris’s design work. David shamelessly pleaded that Chris join the department as a part time instructor and the resident designer. The rest, as they say, is history.