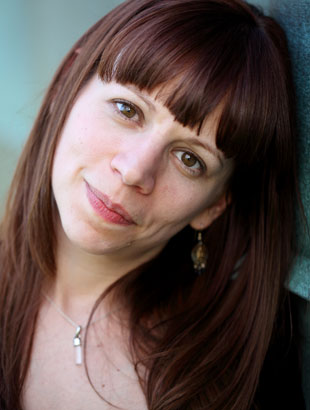 As difficult as it is to imagine, Annie was a painfully shy child growing up. Her mother enrolled her in an after school musical comedy class in hopes that she would embrace more lightheartedness. This group of after school youngsters turned into a small performance group called “Short Subjects” and performed throughout the greater the Los Angeles area, in the local carnivals, and on Hollywood Boulevard during the holidays.

Annie’s favorite memory of performing as a child was when she sang Kermit the Frog’s ballad, “It’s Not Easy Being Green.” Although she wasn’t green or a frog, she really could understand the emotional journey Kermit was going through. She expressed this during her performances, which always brought her mother to tears. If anyone is interested, Annie’s mother is available to embarrass her and will gladly show you the VHS video of her performance over and over again. She was also very fortunate to land the role of Annie and Tessie in the high school production of “Annie.” Yes, there were incidents with the dog. Annie’s work with Sandy the dog was one of the first times where she discovered the art of improv comedy. She also experienced her first stage kiss during this production, where she had to kiss President Roosevelt on the cheek, to which Annie protested and cried. She was clearly not that kind of girl! However, being the professional that she was, she did it anyway. After Annie’s 11th birthday, roles were increasingly difficult to come by. Sure, when you’ve already tasted success like that, how can you find anything better? She vaguely remembers playing a munchkin in the “Wizard of Oz” in grade school. However, her ultimate low was when she played the part of a book in a church play where the actors lip synced to an audio recording of the play.

In high school, the torches burned a little brighter for her when she landed a few roles along the way. Her favorite was during her senior year when she was cast as the part of Audrey in “Little Shop of Horrors.”While at college, Annie’s mind was blown when she discovered plays that weren’t already made into movies! She also learned that the art of creating a character could not be found in the rewind and fast forward buttons on her remote control.

It turned out that Annie loved learning just as much as she loved the theatre. In turn, she pestered the professors at Clackamas Community College and took every theatre class they offered. She studied hard and transferred to Willamette University shortly after. While there, Annie had the opportunity to study under many other wonderful professors and guest artists. Her senior thesis project was to write and perform a one woman show in addition to her thesis paper. This was one of the most difficult and rewarding projects Annie had ever worked on. It was during this project that she discovered her love of writing and performing original comedic pieces. She also began her multi-media relationship with Orie Weeks III, who is now her husband. She obtained a Bachelor of Arts degree from Willamette University in theatre studies, and has been fortunate enough to direct and act in some remarkable plays outside the college.

In addition to her love of theatre, Annie’s love of comedy is ever-present. If you can’t find her in a play, you’ll most likely find her writing comedy, performing sketch and stand up, or dreaming up her next great and bizarre idea!