Cole and Comedy: The Genius of “Kiss Me, Kate”

Political satire and gallows humor were integral to the scene in sleazy cabarets in pre-war Berlin, and ironically history has never captured that scene more powerfully and memorably than in a little musical based on a play based (“I Am A Camera” by John van Druten) on the book Berlin Stories by Christopher Isherwood. The creeping horror of the Nazi world lurks right around the corner as Cabaret comes to life onstage. Despite this lurking, everyone keeps right on dancing, mugging and acting outrageously in the face of impending doom during the dying Weimar republic.

The version of this popular 1966 show by John Kander, Fred Ebb and Joe Masteroff at the Clackamas Repertory Theatre (David Smith-English directs) pulls out all the stops, and the arch, demented emcee, here played by James Sharinghousen, makes Joel Grey‘s famous film version of the character look like a cute little puppy dog. Smith-English has led Sharinghousen into a dark realm to play this metaphorical character, who represents German decadence and decay that was to follow in the wake of World War II. With his slitted eyes, evocative bi-sexual makeup, brassiness and sassyness of a knowing child, Sharinghousen is part reptile, part bird of prey: He is the antithesis of cute, and also highly acrobatic, as, lizardlike, he scales the scaffolding to the top of the stage, and stares unblinkingly down on the action unfolding below. Unfortunately sometimes, the action below isn’t half as interesting as this creature up above (but not often). He’s a metaphor gone wild.

The story follows an American writer, Clifford Bradshaw (played with easy charm by Joshua Stenseth) who lands in Berlin with very little money, and immediately gets drawn into the seedy but charismatic city. When he visits a cabaret called the Kit Kat Klub, he meets the legendary Sally Bowles (Brianna Rouse), an English performer with loose morals and low-life pals despite her sweet-faced countenance. Their romance echos a subplot involving the Germany landlady Fraulein Schneider (Sharonlee McLean) and Herr Schultz (a strong sketch by James Lawrence), a Jewish fruit seller. They hope to get married, but things are getting out of hand politically, which gives the good fraulein cold feet. They have some of the best-crafted songs in the show, including the saccharine but catchy “It Couldn’t Please Me More” (The Pineapple Song) and “Married.”

The dance numbers are in-your-face and over the top, sexually frank at times, and beautifully conceived of by choreographer Wes Hanson. The dancers, too, are in top form, with perfect, seemingly effortless execution of complicated steps. The Charleston, the polka and other vintage styles of movement come to life with a twist. Couples lock lips on occasion, while executing complicated dance steps: at times, the entire group of sleazy cabaret performers move as a single entity, like a feral beast or a copse of trees in a lively wind, on the dance floor. Often, the Kit Kat employees in their strange get-ups and off-putting makeup look down on the action like members of a mute Greek chorus, or witnesses to the unfolding personal stories waiting to bump up against the terrors of the Nazi regime.

The set design by Christopher D. Whitten is spare, economical and multi-purpose, and his lighting design does much to create mood for this very fine production. Costumes by Alva Bradford, many in shades and textures of black, white and brown, are authentic, imaginative and theatrical. 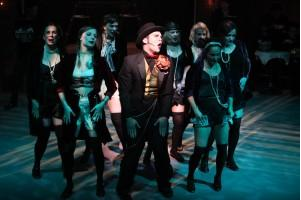